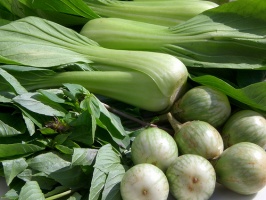 Nope. Thai food isn’t bad for you at all, and is much more nutritious than the usual American fare. There are some misconceptions about Thai food among Westerners that I will try to clear up.

I’m not completely sure where the idea that Thai food might be unhealthy for you comes from. I think it might have to do with the fact that Thai food has lots of spices and has a reputation in some circles of causing diarrhea.

The only thing unhealthy about Thai food is the fact that it almost universally includes white rice. White rice has the same nutritional value as white bread, which is essentially nada.

I also complain about Thai food having its fair share of pork, which I consider to be unhealthy. But Thai people ask me how can it be unhealthy when they eat it and are so thin and healthy. It’s hard to argue with them about that and I guess in moderation it’s probably not so bad.

I wish that Thai restaurants offered the option of whole-grain rice, but unfortunately most don’t. But the white rice is really the only thing in Thai food that is bad for you because it is a simple carbohydrate and tends to raise blood sugar quickly.

Thai food also has lots of seafood, which contains lots of omega 6 and beneficial fats. Almost every dish and a Thai restaurant comes with the option of having shrimp, squid, chicken, or pork as the meat.

Most Thai dishes have lots of vegetables in them which, as we all know, are packed with vitamins and great for your health. There also isn’t MSG or any other so-called “flavor enhancers” in Thai food.

Thai food is very spicy and hot to the taste, I will admit. In fact it is too hot for many Westerners, especially upon first try. But the spices aren’t bad for your health at all and most are vegetable-based and contain flavenoids and other beneficial nutrients.

So don’t believe the hype when people tell you that Thai food isn’t good for you. It is very healthy and definitely will not make you fat. Just take a look at a crowd of Thai people and see how thin they are compared to a crowd of American people, and then tell me who’s food is bad for you.