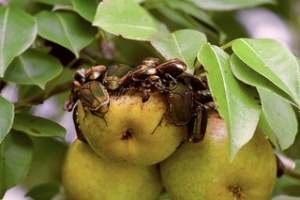 So you’re thinking about eating a Japanese beetle and you want to know if it’s going to kill you or not, right? Yes, it’s probably good to do a little internet research before you go eating various critters for the first time.

Not only can you eat the adult Japanese beetles, but you can eat immature beetles in any stage of their life cycle including grubs, pupa, and eggs.

Japanese beetles are very high in protein content and as much as 40% of their body weight may be composed of protein. Because of this, they may be substituted for meat when cooking.

In fact, the World Health Organization has estimated that insects such as the Japanese beetle could supply much of the world with its needed protein content because of its plentiful in this and cheap cost.

In the United States we don’t eat insects very much, of course. But if you can believe it, insects such as the Japanese beetle are commonly consumed in many countries, especially Asia. Where incomes are low and meat costs are high, they can be a convenient protein option.

I live in Thailand and here in Asia it is quite common. Every day I see the carts filled with various insects that are fried and usually consumed in a type of spicy salad. I’ve never seen Japanese beetles, per se, but they are not that common here either. If they were, I’m sure they would eat them too.

Although Japanese beetles are safe to eat, I don’t have any special recipes to impart to you, unfortunately. I do suggest that you thoroughly rinse and cook any Japanese beetles before you eat them, however. That is because all insects carry bacteria that are best killed by heat before eating.

Try frying adult Japanese beetles were grubs in oil in a wok or fry pan. That is how they do it here and the girls say it is delicious, although I have never had the courage to partake, myself.

Finally, check out this interesting video about edible insects and how they are a major part of the diet in many parts of the world: