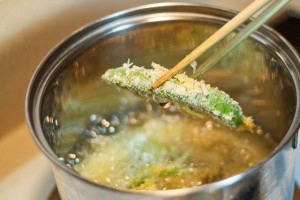 When reading health literature, we are told again and again that we should avoid refined oil in favor of extra-virgin oil. This is true with a few exceptions, one of them being for cooking.

Vegetable oil is usually noted as a poor choice for baking or frying because of its low smoke point. The smoke point is the temperature at which the oil begins to burn. When cooking, we don’t ever want to reach that temperature because it causes fundamental alterations in the chemical structure of the oil. Often, it creates carcinogens in addition to ruining the natural flavor of the oil.

It is true that vegetable oil has a lower smoke point than conventional oils such as butter and lard, but those options are so unhealthy for us. There has to be a better way, right?

Well, it turns out that refined vegetable oils have a higher smoke point than their extra-virgin counterparts. Yes, the refined oils have lost many of the healthy vitamins and enzymes during the production process. But they would have been degraded during the cooking process anyway, so it shouldn’t be a consideration for cooking.

Refined avocado oil has a smoke point of about 450 degrees Fahrenheit and peanut oil can get just a bit hotter than that even. This means that both are excellent candidates for frying and baking. You may have noticed that some restaurants have begun advertising that they prepare their french fries in peanut oil. This is indeed a nice selling point and healthy improvement over the conventional oils that are packed with saturated fat.

As you might expect, you’ll find that to you refined oils are less expensive than the premium extra-virgins. I usually keep a large bottle of refined oil in my pantry and a smaller bottle of the expensive stuff in my refrigerator for safekeeping.

So there really is no reason to for anyone to continue to use saturated-fat based cooking oils. The health detriments of doing so are well-established, and with the smoke point issue largely resolved there is no benefit to doing so. Go ahead and throw away that Crisco oil (ugh!) and replace it with some cheap refined avocado or peanut oil.

For the Avocado Aficionado